Lt. Phillips, of New Jersey, first enlisted in the Coast Guard but transferred to the Army Air Corp.  On May 15, 1942 he was accepted as an Aviation Cadet.  He would graduate from Aviation Class 43-G and be assigned to the 354th Fighter Group, 355th Fighter Squadron in November of 1943.
In 1942, as a cadet, and before he would leave to go overseas he would marry his sweetheart Norma Griffiths of New York.

LEARNING FROM THE BEST!
On January 11, 1944 the only fighter pilot to win the Medal of Honor would return from a mission escorting 8th airforce "Big Friends" over Germany.  The bomber crews would sing the praises of the P-51 pilot who seemed to be everywhere and who had fought off 30 German fighters planes all by himself.  This pilot was Col. James H. Howard.
In this photo Col. Howard shares that moment with his fellow pilots.
(L-R in the photo) Lt. William Pitcher, Lt. Franklyn Hendrickson, Lt. Edward Phillips, Maj. James Howard, Lt. Loren Long, and Lt. Glendon Buer. 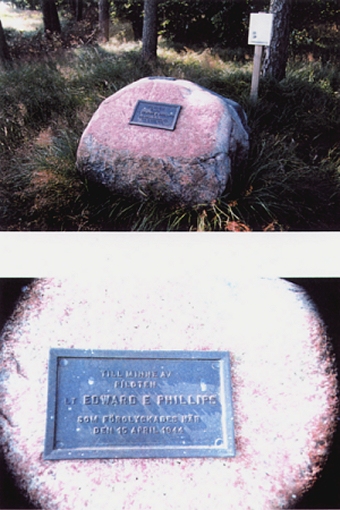 TRIBUTE TO A PROMISING LEADER
On April 14, 1944 the 354th flew a long range fighter sweep in very poor weather to Northern Germany.  Lt. Phillips was flying this mission in P-51B # 43-12126 and was seen spinning out of the overcast over Sweden crashing into the ground.  Here is what the unit history said about Lt. Phillips that day," This well mannered , brave flier will be remembered by us always for his fellowship, good nature, ready wit and sound judgement.  He was a potential leader."
In the summer of 1992 a Swedish group,Skummeslov Mustang Group, unearthed the wreckage of Lt. Phillips.  From the soft mud in the plowed field where his plane had come to rest the P-51B Mustang # 43-12126 was removed piece by crumpled piece.  This work was undertaken by a determined group of Swedes consisting of Ingvar Johannsson, Sune Andersson, Sven Goran Olsson, Ingemar Olsson, Jarl Svensson and IngvarJonsson.
On April 15,1994 this memorial was placed in his honor on the spot where he crashed by this group of Swedes. The inscription reads, " To the memory of the pilot, Lt. Edward E. Phillips who crashed here on 15 April 1944".    The parts from the crash are undergoing some reconditioning and are being presented in a program put together talking about their work with the Mustang.
In 1997 Norma Phillips Rollinson and her brother-in-law Frank Phillips were able to visit the site of the crash on Svensfalt Farm where the memorial was placed.  They also were able to view pieces of his plane that had been recovered and meet the man, Hilding Bengtsson, who had witnessed the crash of Lt. Phillips.  It was this man that had witnessed Lt. Phillips' body fall from his plane as he attempted to jump at low altitude He would recover Lt. Phillips' body and take it back to the farm in a horse-drawn cart after the crash.
Thanks to George and Peggy Ridler who renewed a 40 year old search for Norma Phillips Rollinson and were able to find her, and informed her of the memorial to her late husband.
355th Fighter Squadron